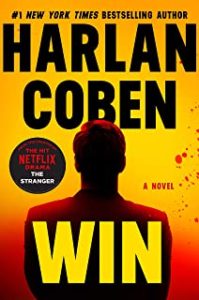 The Win of the title does not refer to the outcome of a contest, but rather to the shortened version of Winthrop Horne Lockwood III.  In this outstanding Coben cliff-hanger, Win is at center stage rather than the sidekick to Myron Bolitar as in the other Coben books, and center-stage is where Win belongs.

This convoluted and complex  tale begins with a 1970’s anti-VietNam War protest gone wrong, takes an unpredictable turn with the theft of a Vermeer and a Picasso belonging to the Lockwoods, and Chapter I takes us to the murder of the perpetrator of these two apparently unrelated crimes.  When a suitcase belonging to Win shows up at the murder scene and since the Vermeer is there as well, Win becomes embroiled in this complex story, and a good one it is.

We get plenty of Win’s martial arts violence and his weird sexual appetites, but we also see a side of him that hasn’t come through in the Bolitar books.  This is a quick read but one that requires the reader to keep many characters and their roles straight as the story unfolds.  A good one.