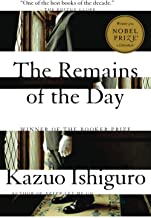 The Remains of the Day by Kazuo Ishiguro 1989

Sometimes don’t you just want to reach into a book and throttle one of the characters?  That was certainly my impulse on a number of occasions in this Booker Prize winning novel of 1989 by Kazuo Ishiguro, the 2017 Nobel Prize in Literature winner.

The character in question is Mr. Stevens (in another indication of his remoteness from the world of human relationships, we never do learn his first name) the butler at Darlington House, a distinguished seat of English gentry that has recently passed from the late Lord Darlington to an American, Mr. Farraday.  Along with the passing of Lord Darlington, post-WWII England has seen the end of the great houses and their large staffs (Stevens’ staff has shrunk from 18 to 3!), but Stevens lives in the world of the past when Darlington House was at the center of world events and along with the distinguished nature of the House and the Lord, the dignity that he brought to his work was all he needed in his life.

We learn about the events of the past as Stevens takes a rare holiday, motoring to Devon in Mr. Farraday’s Ford,  We learn of Lord Darlington’s efforts to achieve rapprochement between England and Nazi Germany before 1939 and about Stevens’ relationship with the Darlington House’s housekeeper, Miss Kenton.  It is this relationship that provides the focal point and fulcrum for this wonderful novel.  While Lord Darlington’s efforts are misguided and he is later denounced as a Nazi sympathizer, Stevens’ and Miss Kenton’s relationship is misinterpreted as well, at least by Stevens who is clueless about human relationships outside of his role as butler.  He even abandons his father at the time of his death because he must attend to Darlington and his guests.  The world has changed, betraying Stevens in his attempts to maintain order, decorum, dignity, and above all else, appearances.

This is a beautiful book in its language, its portrayal of human relationships, and what it means to look back on one’s life as one approaches ‘the remains of the day’, life’s final stage.  This book alone would justify Ishiguro’s Nobel Prize and it is well worth reading or re-reading.

Nobody Runs Forever by Richard Stark (#2674)
Scroll to top