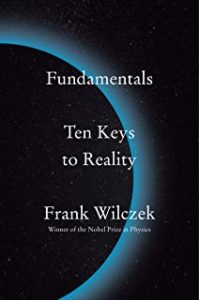 This is a very important book, I think.  My problem is that I didn’t understand much of it.  Wilczek, a Nobel Prize winning scientist, MacArthur Award winner, and MIT professor does a fine job of explaining the complexities of today’s physics and chemistry, but it’s just plain, damn complicated.  Sentences like the following kept me off balance and while not confused, certainly not enlightened:  “In the imaginary world, the weak force is mediated by gluon-like (and photon-like) particles–the W and Z bosons–that change and respond to two new kinds of charge.  The kinds of charge—let’s call them weak charge A and weak charge B—are similar to, but distinct from, the three color charges of quantum electrodynamics.”  Sure, Frank.

To be sure, his discussions about space, time, the few ingredients of matter and the few fundamental laws that govern their behavior, the Big Bang, complexity and complementarity are erudite and as readable and understandable as this 75 year old could muddle through; but let’s face it, this is tough stuff, even for someone who went to medical school, did research at NIH, and has tried to keep up with these matters over the last 50 years.

Unless you are excited about the Higgs particle and gravitational waves, take it from me that the universe is very old (about 14 billion years), that all matter including our brains is made up of elementary building blocks at the sub-atomic level which interact in predictable ways, that man has free will but his mind and his actions are carried out by these particles in conformity with these fundamental laws.  Wilczek makes the case that we are tapping only a small fraction of our mind’s potential, a potential that will be incredibly increased over time by computers and AI.  The future, well beyond our life spans, will be very different and very difficult to predict.  His final chapter thankfully adds the mystery and beauty of life to the laws of science.

Read this if you have a PhD in science, if you are desperate to understand how the world works, and if you are willing to feel very dumb in the process.