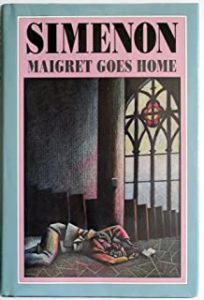 Poor Maigret, after just one book set in Paris, Simenon has him back in the sticks, in this case the chateau in Saint Fiacre near Moulins where he grew up, the son of the steward of the chateau.  He’s brought back to his childhood home by a mysterious note which he spies one day at police headquarters warning that there will be a crime at the early mass on a given date in Saint Fiacre.  Maigret goes home, attends early Mass, and is there when the Countess dies quietly in her family’s pew.  What happened and who did it?

This book reads more like an Agatha Christie ‘closed door’ murder mystery with a conclusion taking place in a darkened dining room in the Chateau with the potential murderers grouped around a table with a revolver in the middle of it and the Count warning that the murderer will be dead by midnight.

Maigret plays a largely peripheral role in this unusual Simenon, but one that again emphasizes his “I suspect no one” approach to investigation.  Watching, waiting, listening all combine to result in the guilty party being identified.

Still hoping for a Paris based mystery for our Chief Inspector.