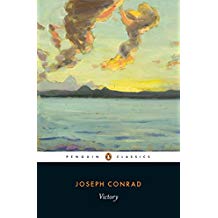 In reading this classic, I was reminded why Conrad is considered to be one of the greatest of English writers.  The plot and the characters are memorable and the setting is Conrad’s familiar exotic tropical location—isolated, steamy, and accentuating those qualities of our species that are both exalted and despicable.  In this case, a Swedish exile, Axel Heyst has left England after the death of his father, an internationally recognized but unappreciated philosopher whose work emphasized the impotence and insignificance of man’s efforts.  Heyst travels the world, an unattached spectator of human folly, until he ends up on Surabaya, a port in Dutch Java. There, in a random and spontaneous act of kindness, he befriends a bankrupt and gives him the money to save his boat and later invest in a coal mining operation on a small, nearly deserted island, Samburan.  When that fails and his friend dies upon returning to England, Heyst lives on alone and content on Samburan except for rare visits to Surabya.  There, in a hotel operated by a German named Shomberg, he meets Lena, a young woman who is threatened by Shomberg.  Once again, Heyst disregards his guiding principle of being only a spectator and becomes involved, helping Lena escape with him to Samburan.  There, Heyst’s paradise is threatened and ultimately destroyed by greed, envy, jealousy, and violence after Shomberg sends three desperadoes to steal Heyst’s fictitious treasure. Conrad has written a great yarn as well as a further interrogation of what it means to be a man both as an individual and in society.  If you’ve read Lord Jim or the Heart of Darkness, you’ll know that Conrad is worth returning to and Victory is a fine way to do it.

Terrain: Ideas and Inspiration for Decorating the Home and Garden, ed. Greg...