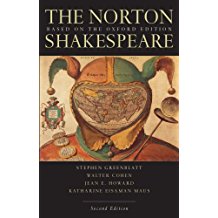 I re-read Shakespeare’s tragedy about the Othello, the Moor who leads the Venetian forces sent to Cyprus to ward off the Turks, and his beautiful and virtuous wife, Desdemona in preparation for the production at the ART later this winter.  As a further introduction to that performance, last night we attended a ‘conversation’ at Harvard between Stephen Greenblatt, Harvard professor and leading Shakespeare scholar, and Bill Rauch, the long-time artistic director of the Oregon Shakespeare Festival and the director of their production of Othello which he has brought to the ART.  Thus prepared, I read the Norton Shakespeare’s version of the play.  It’s amazing how despite several prior readings, the play is as fresh and as new as it must have been 400 years ago.  The issues of ‘otherness’, race, misogyny and the human failings of envy, jealousy, rage combine with memorable characters to provide spell-binding reading as well as stage performance.  At a time in America where Black Lives Matter, #metoo, and immigration dominate our political agenda, Shakespeare continues to have much to teach us and for us to ponder.