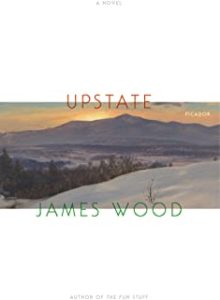 One of the only positives about the COVID crisis is that it has forced me to attend to the piles of books in various rooms that have been mentally labelled ‘to be read’.  Upstate is one of those books, a novel by my favorite literary critic whose courses at Harvard I have audited and who I have been able to engage in conversation in several settings from lecture hall to bookstore readings to the aisles of the Harvard Square CVS.  Having found Wood’s critical analyses of fiction to be superb, I wanted to love this novel, but alas, it left me a bit cold.  Fearing that I had missed something, I read Vivian Gornick’s review in the New York Times and must agree with her comment that: It is not necessary that we, the reader, understand, as an analyst might seek to understand, the origin in such a character of a constitution permanently afflicted by the dread of existential nothingness. However, it is very necessary — if the book is to lift itself from the quotidian to the metaphorical — that we feel that dread; and feel it so strongly we connect anew with our own experience of the humdrum anxiety embedded in daily life. If we do not, all is summary and surface. And the latter, I am much afraid, is what prevails in “Upstate.”  The character with existential despair who Gornick is referring to is Vanessa, the younger daughter of Alan Querry, a 68 year old British real estate developer, who travels to Saratoga Springs, NY with his older daughter in response to an email from Vanessa’s boyfriend that she has harmed herself.  We learn of Vanessa’s long struggle with depression, a condition that appears to be well-suited to her career as a philosophy professor at Skidmore.  The cold, gray, sleety winter which Alan encounters mirrors the dark, brooding relationships between the sisters and their father, relationships shadowed by the divorce and then death from cancer of their mother.  This is not a happy, spritely book, but it could have been more engaging and enlivened.  Gornick points out that while there are many novelists turned critics, it is a rare critic who can write the successful novel, perhaps because the critic can never abolish the deep knowledge of literature and her concerns about how her work fits into this pantheon.  I am looking forward to Wood’s next review in the New Yorker and his next book of critical essays, as well as hoping that if I bump into him again at CVS, he hasn’t read this review.

The Road Washes OUt in the Spring: A Poet’s Memoir of Living Off the Grid...