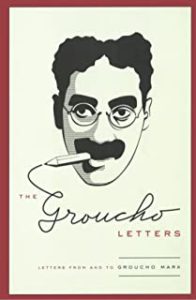 Julius Henry Marx was the third of five sons born to Jewish immigrants on NYC’s Upper East Side and became one of the best known comedians of the late 20th C as Groucho Marx.  Starring in 26 movies, 13 of them with his brothers, he also had a successful career in radio and television.  Known for his ad-lib quips (including my favorite which is on the header of this web site), he was much loved and imitated.  The Groucho Letters were collected by either Fred Allen, who owns the copyright, or Arthur Sheekman, one of his funny friends who wrote the introduction.  It followed two autobiographies Groucho wrote.  The letters are the perfect fare for our time of COVID, BLM, and trump—-witty, funny absurd, disrespectful.  Most of them are addressed to his friends in comedy, individuals whose names have not survived the test of time including Allen, Sheekman, Goodman Ace, Harry Kurnitz, and others.  On the other hand, there are examples of his correspondence with E. B. White, T.S. Eliot, Brooks Atkinson, Booth Tarkington, Edward R. Murrow, and Alistair Cooke in which Marx, despite only finishing 12th grade, demonstrates intellect, values, and insights of a well-educated person.  His letter to the president of the Chrysler Corporation urging him to emphasize safety instead of speed, was well ahead of his time.  Most of these letters are filled with inside-baseball trivia about people, places, and events that are of no importance  but there are gems among them and some good belly laughs to lighten the day.  A good read for escape.

Spirit of Place: The Making of a New England Garden, Bill Noble (#2573)
Scroll to top