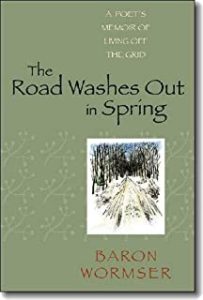 The Road Washes Out in the Spring, Baron Wormser 2006

This hardcover, plastic encased book was evidently bought some years back at the annual summer used book sale at the Stowe Free Library in Stowe, VT, a favorite event for us.  Since that distant summer, it has sat on bookshelves, nightstands, and various tables in Vermont, but I never managed to get past page 31 as evidenced by my bookmark until the COVID sheltering in place created time and opportunity.  And I’m thankful they did.  Wormser is a well-known poet living in Montpelier, VT after a long stretch in Maine where he was the poet laureate from 2000-2005.  I was drawn to this tale of living off the grid in very rural Maine because both Wormser and I are in our mid-70’s, Jewish, originally urban, and now somewhat rural.  It’s a fine book with alternate sections describing he and his wife’s experiences living a mile down a somewhat passable road with no electricity, heat other than their wood stoves, and water other than a well.  They experienced a closeness to nature, the silence and its sounds, that I’ve often thought about, and he was able to turn that peace into beautiful poems like his role models, Whitman and Dickinson.  Whether logging, cutting, splitting and hauling their firewood or cooking simple meals while bringing up two small children, the younger being born in their cabin, Wormser is both precise and lyrical in his language.  Makes one long for the simpler days of the 1970’s!  An added pleasure is that he was a librarian at a small school in Mercer, Maine during this period and his stories about the library remind me of our own Mary L. Blood Memorial Library, here in Brownsville.  This book is a treat for anyone who loves poetry, nature, and the fantasy of self-sufficient country living.