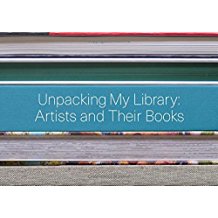 Unpacking My Library: Artists and Their Books, ed. Jo Steffans and Matthias Neumann, 2017

This Is the third volume in this series, titled from an essay by Walter Benjamin. The editors photograph the library shelves, interview the artists and ask them to choose their top ten books and these are presented in chapters devoted to the 10 artists. Some of the were new to me (Janet Cardiff, George Bures Miller, Wangechi Mutu, Billy Childish) and some well known (Mark Dion, Tracey Emin, Theaster Gates, Martin Parr, Ed Ruscha, and Carrie Mae Weems), but all were interesting. The interviews were pedestrian and borderline boring, but the shelves and the top tens were, as in the prior two collections (Architects and Authors) quite fascinating. Repeat appearances which I randomly noticed included Robert Franks, The Americans, John Steinbeck, Jack Kerouac, Claudia Rankine, Flaubert, Dostoevsky, Sebald, Patti Smith. Always fun to snoop in other’s shelves!