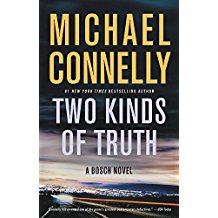 A terrific Connelly story featuring Harry Bosch as a part time detective with the San Fernando PD after retiring from the LAPD. A 30 year old murder/rape is reopened after new DNA evidence is found to exonerate the convicted murderer and Bosch is accused of planting evidence in the original case. This story line weaves back and forth with a new double murder case in San Fernando where a father and son pharmacist are executed by oxycodone ring hit men. Bosch goes undercover while Mickey Haller works to exonerate him in the old case. A distraction with a third story line about an addict who Bosch tries to save using his ‘earthquake money’ is less successful, but overall it’s a fine Connelly work.

Unpacking my Library: Artists and Their Books, ed. Jo Steffans and Matthias...
Scroll to top