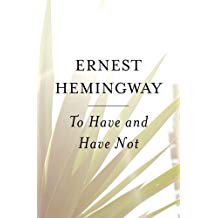 To Have and Have Not, Ernest Hemingway 1937

I read this book in 2 days in Key West just before we visited the house where Hemingway wrote it in 1937.  Written in the characteristic Hemingway style of short, choppy sentences, long on action and short on description, it tells the story of Harry Morgan, a fisherman in Key West who has a run of bad luck and bad decisions—a sport fisherman flies out of Havana without paying Harry the $880 he owes him for a week of fishing and losing his gear; Harry kills a Chinese man who paid him $1200 to smuggle 12 Chinese men from Cuba to Key West and abandons them on a sandbar; he gets shot and loses an arm as well as his boat while bootlegging liquor from Cuba to Key West when a Washington guy on a fishing charter reports him; he gets involved in a bank robbery in Key West and is taking the robbers to Cuba when he is killed trying to kill them.  Action packed with enough side stories to fill several more books, my modern sensibilities bridled at the repetitive use of ‘nigger’ and ‘rummy’ and other derogatory terms that were commonly used 80 years ago.  This may not be one of Hemingway’s top five, but Harry Morgan is one of his best characters and reading it in Key West was special.  Hemingway committed suicide 58 years ago, but he’s still a major presence in American literature and is likely to remain so for the long term.

Black is the Body: Stories from My Grandmother’s time, My Mother’s...