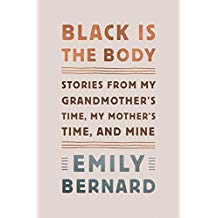 Emily Bernard is a tenured professor at the University of Vermont.  She is the mother of adopted twin daughters who were born in Ethiopia.  She was stabbed and seriously injured by a psychotic man during a random visit to a coffee shop when she was a graduate student.  She is married to another professor at UVM.  She was born and raised by two physicians in Nashville and has a large, close family in Mississippi.  I could go on telling you other characteristics about Emily Bernard but the central one, the defining one, the one that has had the most impact on her and is with her every minute of every day is that she is Black.  In twelve essays addressing most of the characteristics that I itemized, she repeatedly returns to what James Baldwin’s epigram introduction to the book refers to as ‘black is a condition.”  She writes powerfully and visually, and I truly felt an understanding of how being Black in America today (most of the book’s events antedate Trump) means being 100% aware of your differences and how they make you vulnerable, insecure, and cautious whenever you are out of your own community or home.  Despite being married to a wonderful white man, Bernard continues to have trouble trusting whites and believing that she is not being judged all the time.  Upon finishing this book, I found that it had been reviewed this week in the Sunday New York Times Book Review along with three other books under the heading:  Essays by Women of Color.  The reviewer, Camille Acker, calls the book a ‘well-crafted narrative’ and says that ‘the collection dazzles.”  She quotes Bernard’s fine delineation between being Black in the South and the North:  “In the South, white people want you close but not high. In the North, you can get as high as you want but they don’t want you close.”  This book is important.

To Have and Have Not, Ernest Hemingway (#2378)
Scroll to top