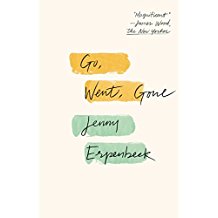 Richard (we never do learn his last name) is a former professor of  Classical Philology living in the former East Germany whose former life included a wife, now deceased.  Richard has recently retired but is unsure of what to do with his life.  He shops, cooks, reads, walks, and spends time staring at the lake outside his home, a place where he had always boated but which he now avoids since a man drowned there last summer and his body was never recovered.  These images of ennui, drowning, a lost former life and wife recur and are repeatedly mirrored for him as he becomes increasingly involved with a group of African immigrants camping in one of Berlin’s squares.  For reasons that even he is unsure of, Richard begins to interview the men who come from many of the 54 different countries of Africa and have experienced harrowing losses of wives, children, parents, and friends as they escaped civil wars and religious massacres in their home nations only to experience near death events on the crossing of the Mediterranean only to find that Germany doesn’t want them to stay.  Faceless and impersonally labelled ‘immigrants’ Richard gradually learns their names and stories, and eventually commits his savings, his home, and his life to providing them with dignity even if he can’t solve their legal problems.  The book is skillfully and beautifully written, slowly building an emotional head of steam until the reader is left exhausted by the book’s end.  At one point Erpenbeck quotes her fellow German Brecht:  “He who laughs has not yet received the terrible news”  The book’s theme about human dignity and the meaning of every individual at this time of Trumpian hatred, division, and demagoguery is particularly relevant.  Hitler’s Germany is never far beneath Richard’s consciousness as he strives to understand what ‘the other’ means for him as a human being.

Purchase this book from your local indie bookstore

Purchase this book
The Power of Zero: How to Get to the 0% Tax Bracket and Transform your Retirement,...

Black is the Body: Stories from My Grandmother’s time, My Mother’s...
Scroll to top