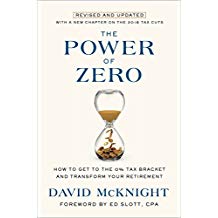 The Power of Zero: How to Get to the 0% Tax Bracket and Transform Your Retirement, David McKnight, 2018

In this thin volume, revised after the Republican tax cuts of 2017, McKnight makes the argument that with the national debt soaring to new levels and with tax cuts in place for the next 7 years, the future beyond 2026 will almost certainly see major tax increases in order to keep Social Security, Medicare, Medicaid and the rest of the Federal budget out of bankruptcy.  If you believe that tax increases in the future are inevitable, you can easily buy his argument that moving dollars from taxable to zero tax vehicles is the way to go, even if as in an IRA-to-Roth conversion you incur a taxable event today.  The book is in large part an advertisement for LIRP, Life Insurance Retirement Plans, another tax free investment, but one with a sizable annual fee and all the usual concerns that attach to annuity-like vehicles.  Given that I’ve already retired, I focused mainly on the conversion to the Roth idea, but for the person approaching retirement, this is a useful book to at least scan.  At the age of 70.5, one must distribute a required minimal distribution (RMD) from their IRA, and that distribution is taxed as ordinary income. In contrast, there is  no requirement to distribute the Roth and it is not taxed.  Moving dollars from the former to the latter incurs a tax today, but McKnight argues that the tax today will be at a substantially lower rate than it will be in the future.  If you believe him, it’s good advice. As always, however, predicting economic events is not for the faint-hearted.  See your financial advisor and tax accountant for some reality testing.