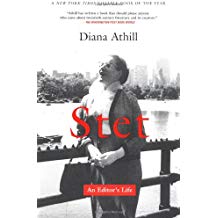 I was saddened earlier this week when I read of Diana Athill’s death at the age of 101 in London.  I had read her second memoir written when she was 90, Alive, Alive Oh and Other Things That Matter and had found her writing to be exquisitely clear and and her subject matter—the writers whom she had known through her work as an editor and publisher—to be fascinating.  Her obituary referred to an earlier memoir, Stet written when she was 80 and it has proven to be just as captivating.  Stet is a word or mark used by editors to indicate that a certain portion of writing which had been deleted should be retained, from the Latin, ‘let it stand.’

Athill, the daughter of a well-to-do English family found that after graduating from Oxford, she needed to ‘earn a living’.  She first worked with the BBC in post-war London but soon found herself working as an editor and then a part (a very small part!) owner of a publishing firm owned by the eponymous Andre Deutsch.  Working there from 1947 through 1985 afforded Athill a front row seat on fifty years of literary happenings in London and the world.  Stet is one long gossip session—she refers to ‘gossip in its highest and  purest form:  a passionate interest, lit by humour but above malice, in human behavior.”  Later in the book, she observes that ‘novelists are so often good at gossip because—like God with forgiveness–c’est leur metier (it’s their job).” In the first part  of this delicious volume we learn of writers whose work helped launch Deutsch’s firm—Mailer’s The Naked and the Dead, Roth’s Goodbye Columbus and Letting Go, most of Updike, 18 books by Naipaul, Jean Rhys’ The Wide Saragasso Sea, and my very favorite, 84 Charing Cross Road by Helene Hanff—and the role that Athill played as their editor.  Ever modest, Athill explains why books ‘have meant so much to me.  It is not because of my pleasure in the art of writing, though that has been very great.  It is because they have taken me so far beyond the narrow limits of my own experience and have so greatly enlarged my sense of the complexity of life: of its consuming darkness, and also—thank God—of the light which continues to struggle through.”  The second part of the book describes in greater detail her relationships with six writers—Mordecai Richler, Brian Moore, Rhys, Alfred Chester, Naipaul, and Molly Keane—and is less interesting though still beautifully rendered.

This is a fine book for anyone who loves books, reading, and writing.  I knew I would enjoy it when the very first sentence begins “Some years ago Tom Powers, an American publisher who is also a writer and historian, kindly told me I ought to write a book about my fifty years in publishing.”  Since Tom has been a Vermont friend for more than 20 years, this was a delightful introduction to a delightful work.

The Power of Zero: How to Get to the 0% Tax Bracket and Transform your Retirement,...
Scroll to top