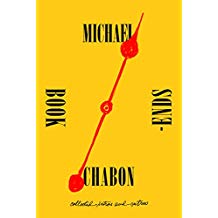 I love to read books about other books, reading, authors, and writing, and Chabon’s collection of forewards, introductions, and afterwards is an outstanding example of this genre.  In 17 “Intros” (including two for books of his own), 5 of what he calls “Outros”, and two sets of liner notes for LP’s, Chabon demonstrates the word play, banter, clever allusions, and leaps of imagination that have made him one of the most popular of today’s novelists and essayists.  I’ve read 3 or 4 of his novels, but was not prepared for the pleasure of reading his essayist’s prose.  In one particularly Chabonesque combination of clever word choice and meaningful image, he described life in two different essays.  One referred to it as the “obscure and broken land between the dazzle of consciousness and its final winking out.”  In another he describes life as the period between an orgasm and putrefaction.  Pretty great stuff!   I thoroughly enjoyed this book despite my nearly total ignorance of the comic book, science fiction, fantasy, and Norse myths books which he included in his “Intros”.  His verbal acrobatics and sense of humor were enough to keep me reading and engaged.  One essay that was particularly moving as well as one that will send me in search of a writer who is new to me was his posthumous tribute to Amanda Davis who wrote one short story collection and one novel before dying in a family airplane crash at the age of 31.  I also loved his intro to The Phantom Tollbooth, by Norton Jester, a book that my four year old grandson and I read last month and is deservedly considered a classic.  Chabon’s liner notes to a special edition set of LP’s by Mark Ronson was fascinating since I’d never heard of this evidently famous and trailblazing musician.  It appears that Ronson has worked with Adele, Lady Gaga, and others and has been nominated for an Oscar for this year’s best original song.  Always something to learn!  Intending to read Amanda Davis and more of Chabon!