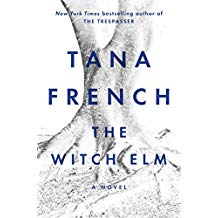 I have thoroughly enjoyed French’s previous books about various members of the Dublin Murder Squad and the crimes that they’ve solved while relating to each other in thoroughly engaging and human ways, but this book was a major departure from her prior work.  The Dublin Murder Squad is there, all right, but only in a supporting role as the main characters, Toby Hennessy, his cousins Suzanne and Leon, his girl friend Melissa, and his uncle Hugo in his old Ivy House are the real stars of this off beat murder mystery.  Toby is a PR man for an art gallery and is living the fine life—own apartment, BMW, beautiful girlfriend, good buddies–when he is severely beaten during a robbery at his home.  Left with PTSD and a significant brain injury, he moves into the Ivy House to care for his Uncle Hugo who is dying of an incurable brain tumor.  The arrangement appears to be good for all involved until Suzanne’s son, Zach, discovers a human skull in the old weich elm in the backyard and the story, having started slowly, begins to pick up steam as first one and then another and then another of the Ivy House family become the major suspect in a decade old murder.  Rafferty and Martin, the detectives relentlessly pursue their man (or is it woman) and the ending comes as a complete surprise.  Turns out that luck determines most of our fates.  In the first line of the book, Toby says “I’ve always considered myself a basically lucky person.”  Several hundred pages later, the reader might or might not care to argue that assumption.