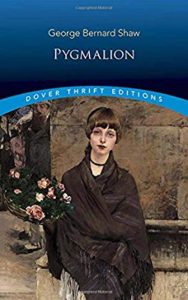 Who’s the only person to win both the Nobel Prize for Literature and an Oscar for best screenplay?  George Bernard Shaw is the answer to one of my all time favorite trivia questions, so it was with great pleasure that I returned to one of his best known plays, Pygmalion.  I had read his Saint Joan four years ago for the same reason—we were going to see the play by the Bedlam company of NYC at the Central Square Theater.  And just as reading Saint Joan had prepared me for a long, complex, and serious tragedy, reading Pygmalion prepared me for the complicated and accent-inflected dialogue of this apparent comedy, a play filled with modern issues 100 years after it was written.  The play is familiar to all of us 70 somethings from the Rex Harrison/Audrey Hepburn movie of 1964, and several times during the production, I expected the cast to break into song, but the play is quite a bit more serious than the movie.  It focuses on issues that were important to Shaw—women’s rights, class privilege, and the rigidity and unfairness of British post-Victorian society.  Little did Shaw or his audience know that within a year, the events of August, 1914 would plunge Europe into WWI and end the world as they knew it.  Reading this play was a reminder of the power of the stage, whether seeing a live play or reading it.