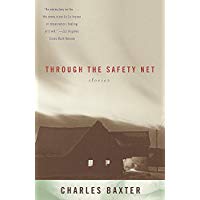 Through the Safety Net, Charles Baxter 1985

Baxter is a master of the short story, though, like James Salter and Richard Yates, he is less well known among the general readership than he deserves.  This volume of stories is funny, sad, comic, and tragic but always spot on. Baxter draws vivid characters who the reader cares about and who linger in memory long after the story ends.  He writes great first sentences, always a requirement in the genre.  For example, Stained Glass begins, “She thought he was a decent enough man until she tried to break up with him”, and Surprised by Joy, a wrenching story about a couple whose only child died, begins “Because their psychiatrist had recommended it, they both began to keep journals.”  Who, what, why all draw the reader in immediately.  And while the beginnings are powerful, the endings to these stories, often surprising, reminded me of Edward Hopper’s paintings since both leave the reader/viewer with uncertainty about how the future unfolds for the characters in the story.  Mark Strand referred to Hopper’s paintings as ‘saturated with suggestion’ and that’s also an excellent description of Baxter’s work.  Much is beautifully described and delineated, but much remains for the reader to speculate and dream about long after the book is closed.

How to Write an Autobiographical Novel, Alexander Chee (#2278)

The Overstory: A Novel, Richard Powers (#2280)
Scroll to top