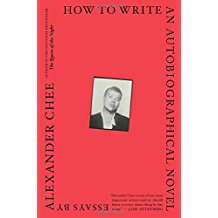 How to Write an Autobiographical Novel, Alexander Chee 2018

Chee has written an extraordinary set of essays which reflect the many elements of his identity and experience as a first generation Korean-American of mixed race growing up in rural Maine, an openly gay man in 1980’s San Francisco during the initial stages of the AIDS epidemic when he was active in the ActUp movement, an aspiring writer who disavowed the establishment and ended up at the Iowa Writer’s Workshop, and a successful novelist and MFA professor.  Through it all runs the theme of hidden hurt that resulted from early life experiences—the death of his demanding Korean father, the bankruptcy and financial woes of his white, American born mother, his sexual abuse at the hands of a church choirmaster and his failure to protect others from the man, the rejections of his early work.  The writing is punctuated with fine images, metaphors, and observations, but there are also long stretches of painful and difficult writing.  My favorite essays are typical of the heterogeneity and wide spectrum of his skill.  In one, very funny and also sad essay,  we learn of his time serving as a cater-waiter for the arch-enemy William J. Buckley in Manhattan, a man who advocated in print having all homosexuals tattooed as a way of warning others of the dangers of sex.  The other lists 100 Things About Writing A Novel—a particularly brilliant set of insights into the challenges and intricacies of writing fiction.  Chee teaches writing at Dartmouth.

Through the Safety Net, Charles Baxter (#2279)
Scroll to top