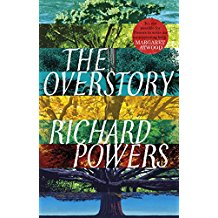 The Overstory: A Novel, Richard Powers 2018

Powers is one of the most interesting, dynamic, and talented novelists in America today. A National Book Award Winner in 2006 for The Echo Makers and a MacArthur Award recipient, he deserves to be among the best known and read novelists of today, but largely remains a ‘writer’s writer’ secret.  This wonderful novel is unlikely to change that, though it deserves to do so.  Having read several of  his prior novels, I was prepared to be both swept away, nearly drowned in intricate and arcane details about his topic, as well as totally caught up with the characters. Despite that preparation, I was overwhelmed at times, though totally taken with the story.  In the first part of the book, he introduces us to the cast of characters beginning with their childhoods, their families, and their early lives all destined to come together in a complicated and occasionally, hard-to-believe story.  This is the novelist as the great manipulator, the Deus ex machina moving the pieces around the chess board— a model that has largely faded away in this post-modern period of the un-novel.  It’s a delicate and complex challenge, but Powers pulls it off with elan.  I loved the characters and my spirits rose and fell with their fortunes—Eric Hoel, great-grandson of a Norwegian immigrant who planted an American chestnut on the Iowa prairie; Mimi Ma, daughter of a Chinese immigrant who planted a mulberry tree in his yard in what would become Silicon Valley; Adam Appich, whose father plants a maple in his suburban backyard; Ray Brinkman and Dorothy Cazaly, who plant a tree in their backyard every year on their anniversary; Douglas Pavlicek, whose life is saved by falling into a banyan tree after being shot down in Viet Nam; Neely Mehta, who is left paraplegic but still a genius after falling out of a coastal oak after receiving his first computer; Patricia Westford, whose father was an agricultural extension agent who took his little girl on all his visits; Olivia Vandergriff, who dies and is resurrected in her last week of college.  Keeping track of them as they come and go, disappear and reappear is not for the faint of heart, but it’s worth the effort.  In parallel to the stories of these characters, Powers gradually but inexorably educates the reader with the details of the biology of trees—how they grow, reproduce, communicate, move, and support entire communities of the biome.  He then weaves the lives of his characters into this biome, alternately writing in an exhausting, 100 mph race of cascading facts and a gentle, lyrical narrative style. The action revolves around the environmental threat of climate change, pollution, loss of wilderness, and the other cataclysmic impacts of the global capitalist juggernaut.  Trees were here long before Homo sapiens appeared, but as Powers’ characters learn and then try to warn the rest of us, we may be here after we’ve eliminated all of the trees, but not for long.  At more than  500 pages, The Overstory is a commitment, but it’s worth every moment.