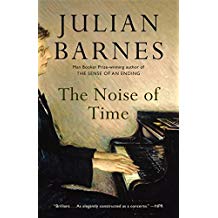 The Noise of Time, Julian Barnes 2016

Barnes, a much awarded British writer, writes about time, life, death, irony, and the compromise of the soul in Stalin’s Soviet Union through the lens of the life of Dmitri Dmitrievich Shostakovich, Russia’s greatest composer of the 20th C.  The title serves as the frame for this novelistic biography, a genre summed up by Barnes’ Author’s Note at the conclusion of the book where he states that there are many versions of the truth of Shostakovich’s life, “highly frustrating to any biographer but most welcome to any novelist.”  The book is written in first person except for the first and final sections.  In those brief sections set off in italics and narrated by an anonymous observer, we learn of a random encounter which he and Shostakovich had with a beggar on a train platform.  These two narratives allow Barnes to riff on the randomness of life, the passage of time, the frailty of memory, and the ‘butterfly effect’ of events that appear to us in real time to have little or no meaning.  Barnes describes the arc of Shostakovich’s life under Stalin and then Khrushchev where even with the protection of irony, his soul was slowly destroyed by his compromises with Power. The metaphor of life being a cat dragging a parrot down the stairs with each step banging the parrot on the head is repeated several times, conveying the composer’s view that life with its accidents and complexity is never orderly and no man dies at the right time.  As he had hoped, Shostakovich’s music has survived and is being widely played in today’s repertoire while he barely registers as a footnote to Soviet political history.  The book was particularly interesting since we have just returned from a visit to St. Petersburg and on the return flight I watched the movie, The Death of Stalin.  Fascinating material and brilliantly conveyed by Barnes.