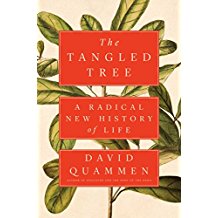 This is a big, hulking, sprawling novelistic approach to some of contemporary science’s most exciting and fundamental explorations, and who better to write it than David Quammen.  In 15 prior books, Quammen has delved into extinction, evolution, Darwin, AIDS, has been nominated for the National Book Critics Circle Award, and received an award for essay writing from PEN.  A Yale grad and a Rhodes Scholar who now lives in Montana, Quammen has never hesitated to take on complex and controversial scientific topics.  In this 460 page doorstop, he addresses the discoveries of the last 40 years that have reshaped Darwin’s view of evolution through vertical lineage and the ‘tree of life’, largely using the life and work of Carl Woese, a relatively little known biophysicist and philosopher of science.  Woese worked at the University of Illinois, and in 1977, he added a new trunk to the tree of life with his description of Archaea—-single cell, non-nucleated organisms that were not bacteria.  Starting with that discovery, Quammen follows literally dozens of scientists as they add observations and new theories about horizontal gene transfer, retroviruses and bacterial plasmids, ribosome structure and function, DNA sequences and CRISPER, and other new ideas.  Reading this was tough sledding even for someone who went to medical school less than 100 years ago, but Quammen has a light touch and writes clearly.  He repeatedly brings the reader back to the central questions: how did life leap from a single cell to multi-cell, complex organisms as different as blue whales and creatures capable of writing symphonies and poems? What is a species and what is an individual? What does the tree of life really look like?  Fascinating stuff and worth the effort for anyone who finds these questions of interest.  For me, the major takeaway is that we have much to learn about basic biology,  but as long as individuals like Woese and the dozens of others cited by Quammen are willing to devote their lives to answering these questions, we’ll continue to better understand the miracle of life.