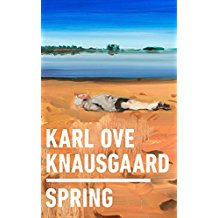 Occasionally, I finish the last sentence in a book and feel disappointment that it is over, or I want to return to page 1 and start again.  Such was my experience with Knausgaard’s Spring, the third volume in a quartet named for the seasons which he wrote during his wife’s pregnancy and after the birth of his fourth child.  The first two books, Autumn and Winter comprised brief essays about everyday objects and experiences which Knausgaard ostensibly wrote to acquaint his daughter with the world, but which he really wrote to force himself to more explicitly focus on the ‘things in his life’ as they passed unobserved, lost in the everydayness of our adult world.  In Spring, the author continues to address his remarks to his now several month old daughter, but abandons the essay form and writes an almost novelistic account of a difficult year for this family.  His wife suffers from severe bipolar disease, and after a suicide attempt, she is hospitalized leaving Knausgaard to care for the four children, the house, and also his now distant wife.  The book, at times, takes on the elements of a suspense thriller (Will he be able to get the hungry, cyring baby a bottle of milk and fill the car with gas despite having no cash or credit cards and being in a town far from home????), but it is primarily the characteristic Knausgaard work of very long sentences filled with detailed  descriptions of the mundane settings and activities joined together by wise, philosophical observations about life: beauty depending on the resonance and connection with another; reality existing on two levels, the objective governed by the laws of nature and the relational, relative reality specific to each person; self-deception as the ‘most human thing of all’; to be alive is to always be in proximity to death; literature as an expression of a non-existent closeness to others, and on and on for nearly 200 pages. Exhausting but exhilarating.  Perhaps the reason I so enjoyed this book is my identification with Knausgaard’s description of being in his writing studio—“I closed the door behind me and sat down behind the desk.  It felt good….I liked being alone, it was that simple, wasn’t it.”  I look forward to reading Summer which has just been published and may even go back to his multi-volume memoir, My Struggle, which I began but couldn’t get past page 50.  My Struggle now runs to six volumes but it if resembles Spring, it would be worth the effort.