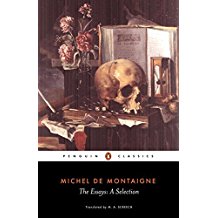 For more than 40 years I have been scrupulous about not including any title in my Book Journal unless I had actually completed the book, but I am now deviating from that policy.  The reason for this deviation is the superb selection of Montaigne’s essays translated and chosen by M.A. Screech, an Oxford professor. My excuse is that Montaigne’s essays run to three volumes and many hundreds of pages and were intended neither to be read in sequence nor all at one time.  I have read the six essays selected by James Wood, Professor at Harvard ,in his course on The Essay.   Since one of them, On Experience, was 66 pages long, I think they qualify for inclusion.  In addition, they’re quite marvelous.  Montaigne lived and wrote in the 16th C., a time of great religious and civil upheaval in France.  After a life of civic engagement, he retired to his tower at the age of 38 where he read, thought, and wrote his Essays.  He is widely credited with inventing this literary form, one which explores a topic (essay is derived from the French word for ‘to try’) from a personal point of view, not feeling responsible for an exhaustive knowledge of the topic or a balanced view of it, but rather as an exercise in ‘trying’ to understand it.  Montaigne spends a fair amount of time on his various bodily functions, but when he gets around to it, his views on dying, death, experience, law, medicine, cruelty, repentance and a slew of other topics are thought-provoking and eerily modern considering they were written 500 years ago.  “I study myself more than any other subject”, Montaigne writes in On Experience, and it is this in depth consideration of his life and how to live it and of his death and how to approach it that makes these essays so beautiful and valuable.  A superb biography of Montaigne, “How to Live,”  was written in 2010 by Sarah Bakewell.  I highly recommend dipping into these essays and reading Bakewell’s book for a view of this quite incredible man and to benefit from his wisdom.

The Unpunished Vice: A Life in Reading, Edmund White (#2309)
Scroll to top