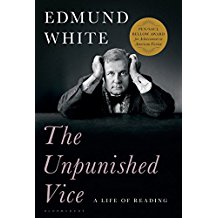 The Unpunished Vice: A Life of Reading, Edmund White 2018

Edmund White was recently named the winner of the PEN/Saul Bellow Award for Achievement in American Fiction, and since one of my favorite genres is ‘books about books’, despite having never read his previous 27 books, I started with his latest, a literary memoir.  White is best known for bringing gay fiction into the mainstream of American literature, and there is a lot of gay history, both personal and social in this volume.  Overall, I didn’t find the book’s random walk through White’s life and his reading very effective. What I did thoroughly enjoy, however, were the sections on literary criticism.  White is a superb sentence writer and his exploration of Nabokov (both Lolita and my favorite, Pale Fire), Proust (still haven’t read that guy!), Tolstoy (he gives Anna Karenina the award for the best novel ever written!), and the lesser known Penelope Fitzgerald and Henry Green were quite wonderful.  He cites many writers from Europe and Asia who I was not familiar both contemporary as well as pre-WWII.  His passing mention of Simenon endeared him to me.  I could quote dozens of pages which were near-perfect, but here’s a sample:  On book reviewing: “A reviewer should summarize the subject, if not the plot, give a sample of the prose, relate this book to other relevant ones, and, most important, say whether it’s good or bad.” On bad characters in novels: “We are drawn to schemers, revenge-seekers, bad hombres, because they have strong intentions in a vapid world, piercing insights into the fog of existence, unrelenting plans in a rudderless world.” on the Ideal Reader: “…she tolerates whimsy and divagations, is happy to learn a new word, wants to be entertained and edified, is capable of getting lost in a book, can tolerate a cliche…is not impervious to strong emotions, may be moral but not moralistic, interested in what is good or fair but not shocked by evil, and certainly not by promiscuity or perversion or any victimless crime.   The reader, it seems, is the definition of a good person, although she is characterized by her receptivity, not her actions.”  On reading:  “Reading has always struck me as a passport to the world, one in which characters are more real than actual people, where values are more intense than in the dim light of reality, where characters fly up into destinies rather than paddle around in ambiguity.”  White reads Anna Karenina and Henry Green’s Nothing every year.  Some great ideas, wonderful sentences, and mostly delightful.

Life in the Garden, Penelope Lively (#2310)
Scroll to top