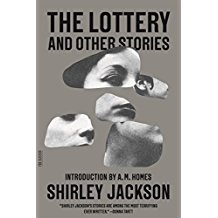 The Lottery and Other Stories, Shirley Jackson, 1948

This volume of 26 short stories is the only one published in Shirley Jackson’s lifetime and, as such, represents the only expression of her choice and ordering of her work. The final story, the eponymous Lottery, garnered enormous attention and controversy when it appeared in The New Yorker on June 26, 1948 and has remained a staple in short story collections since. These stories vary greatly in length, voice, setting, and topic, but all share a few characteristics. They are clearly of their time, the 1930’s and 40’s—everyone smokes cigarettes, all women are called Mrs. and are busy with household chores while the men are all busy with business, there’s nary a cell phone in sight, and everyone rides taxis, not Ubers. What is even more omnipresent, however, is the sense of tension that pervades almost every story. Even when the weather is lovely (The Lottery’s first sentence is “The morning of June 27th was clear and sunny, with the fresh warmth of a full summer day” )and the conversation amiable, one reads these stories with tension in the muscles and a shortness in the breath. You want to sit back and enjoy the new neighbors, the dinner with the woman from across the hall, the wedding that’s scheduled for that morning, the elderly neighbor downstairs, the friendly older man on the train, the challenging new friend at school, the ventriloquist’s dummy, but in every instance, you just know things are going to totally fall apart and end badly—and they do! Interestingly, the epigrams before each of the three final sections are quotes from Joseph Glanvil’s Saddusismus Triumphatus, a book on witchcraft published in England in 1681. Jackson’s infatuation with witchcraft and the spiritual world are nowhere more evident than in The Lottery, a story that has been interpreted dozens of different ways, but at its root, is all about inhumane behavior to a neighbor because of some ancient and irrational set of rules.   Jackson is sui generis and has remained so since her early death in 1965 at the age of 48. She lived her last 27 years in North Bennington, VT.