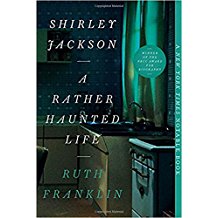 The winner of the National Book Critics Circle Award for biography, this is a big and beautiful book. Not yielding to the temptation that results in so many doorstop sized biographies, Franklin has produced a 500 pager, but it is so well organized and presented that it never felt ponderous. Organizing the material around the twin pillars of Jackson’s life, family and writing, she gives us a detailed portrait of the author’s early life in Burlingame, CA and Rochester, NY, the unhappy, socially awkward, daughter of a critical and cold mother. College at Rochester where she withdrew due to her first episode of depression and anxiety and then at Syracuse was followed by marriage to her classmate Stanley Edgar Hyman, a marriage that both sets of parents rejected. A move to NYC where Hyman began a life-long fraught relationship with The New Yorker and where Jackson began to write short stories was followed by the first of two stints in North Bennington, VT where Kaplan taught at the College. Her first big breakthrough occurred on June 26, 1948 with the publication of The Lottery, the story by which she is best remembered. This was followed by a volume of short stories building on the Lottery’s fame and then the first of her 8 novels. Nominated for the National Book Award in 1957 along with Roth, Bellow, and Updike and hitting the NYT Best Seller list with We Live in this Castle, Jackson also ran the household of 4 children, dealt with her gallivanting and domineering husband, and continued to be the major bread-winner. Her health deteriorated and at the top of her game she died in her sleep in 1965 at 49 years of age. This book has received widespread praise and is a fine introduction to this author who will forever be known for one story but who deserves a much wider reading and readership.

The Lottery and Other Stories, Shirley Jackson 1948

On Tyranny: Twenty Lessons from the Twentieth Century, Timothy Snyder (#22...
Scroll to top