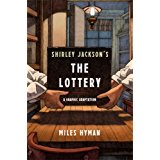 Hyman, who was three years old when his Grandma Shirley died in 1965, has produced a wonderfully scary and authentic translation of his grandmother’s famous short story into the form of graphic fiction. The major and minor characters from the story take form as Mr. Summers, Mr. Graves, Old Man Warner, the Hutchinsons (Bill, Tessie, Bill Jr., Nancy, and Dave) are given faces and bodies to go with the text. Hyman, an accomplished artist and graphic novelist who lives in Paris, intersperses short pieces of text with his panels and, like the short story, the reader is gradually swept from the beautiful weather and the lovely New England village, into the nightmare of a barbaric and senseless tradition that annually claims the life of one of the 300 villagers. At the end of the day, it’s the ordinariness of the slaughter that shocks, and one struggles to figure out what Jackson is trying to teach us. Is it the banality of evil and its universality in human society? Is this a commentary on the Holocaust where neighbor turned on neighbor for no rational reason? Or is this just one of Jackson’s witch and ghost stories writ very large?   I don’t know but read the story and then read Hyman’s graphic treatment of it for the full dose of shuddering horror that I still recall from my first reading of the story many years ago.

The Lottery and Other Stories, Shirley Jackson 1948
Scroll to top