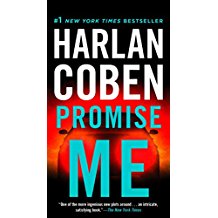 Myron Bolitar, Winn, Big Cindi, and Esperanza return after a six year hiatus in their business of saving people, and Coben spins a complicated and sometimes very dull tale. There are more than enough bad guys to go around, but except for one scene in a closet where Winn eliminates two very bad hombres, it’s mostly an intellectual ‘who done it’. Not really worth recapping the plot, but as usual, Coben does a fine job in keeping things tense and hitting the reader from behind with the surprise ending. Who would have guessed that it was Edna!