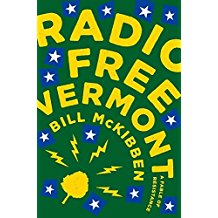 McKibben, a professor of environmental studies at Middlebury College and a long time activist in global climate change and environmental politics has written his first novel, and it’s a beauty. Creating vivid and interesting characters, McKibben tells a witty, funny, and page turning tale about resistance to bigness in modern day Vermont. His lead character is Vern Barclay who has had a daily radio show for decades giving milk prices, high school sports scores, and reminders about baked bean suppers when he decides to undermine a Walmart Grand Opening in St. Albans with some fake interviews. His prank is interrupted by another one when Perry, a hacker and music afficianado, floods the new Walmart with sewage by rearranging their computerized water/sewer settings. These two are joined by Sylvia, the fire chief in Starksboro and Trance, a Vermont born Olympic gold medal biathaloner and the story proceeds to a “make up your own ending” with the onset of town meetings to decide on Vermont secession. A fine first effort from an outstanding Vermonter.