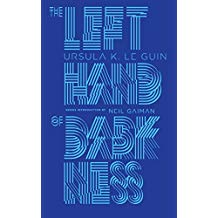 To begin with, this is an amazingly wonderful book. I had not read a science-fiction novel for decades, but then I read of Ursula Le Guin’s death in January of this year, and in keeping with my custom of honoring recently deceased writers by reading one of their works, I picked up The Left Hand of Darkness.  Published in 1969, it has achieved cult status in the sci-fi world, and the edition that I read is in the Penguin Galaxy series of six sci-fi classics edited by Neil Gaiman.  The series includes the perhaps better known 2001: A Space Odyssey, Dune, Necromancer, Stranger in a Strange Land, and The Once and Future King in addition to Le Guin’s classic.  The book is simply marvelous and has all the critical elements of great fiction—a powerful story set in a beautifully described world with believable and sympathetic characters.  It tells the story of Genly Ai, the  Earthling Envoy sent by Ekumen, the federation of 80 planets in the Hainish Universe which cooperate on trade and communication in an attempt to avoid war and optimize living conditions for all their inhabitants.  Ai visits Gethen, the furthest planet in the universe, a land of deep winter where the inhabitants have no awareness of life on other planets.  Gethen’s residents are without gender, developing into either males or females once a month, and after several days during which they are sexually active, reverting back to their androgynous state.  Without the male/female roles with their attendant sexual tensions and stereotypical characteristics (especially the male aggressive need for power and prestige), Gethen has no history of war.  Rather, the inhabitants engage in complex social interactions characterized as shifgrethor, the ability to maintain honor and face in the presence of disagreements.  Ai’s adventures and the cast of Gethenians he interacts with make for a fine novel, and his 800 mile trek with his principal Gethenian ally, Estraven, is one of the great adventures in fiction.  Whether you read this book for its early roots of feminism, its commentary on war and politics (nearly 50 years before Trump, Le Guin describes a demagogic character who is a dead ringer for our present president), or its engaging story, this is a book well-worth reading.