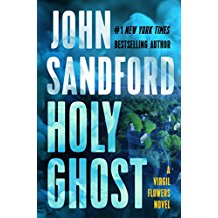 This is the 11th Virgil Flowers book, but my first.  It is a fast-paced page turner featuring Flowers, a clever, idealistic though somewhat jaded state policeman in rural Minnesota.  He is called into Wheatfield, a small town of 600, after a second person is mysteriously shot and wounded while crossing Main Street on their way to the Church which had recently been the site of an appearance of Mary.  After Flowers arrives on the scene, no more people are wounded but three folks are shot dead.  The plot is tight and clever; the repartee with his colleagues and the town leaders is quick and entertaining; and the conclusion is surprising yet believable.  I haven’t added a new mystery series to my reading for several years believing that Simenon, Connelly, Child, Crais, Grafton, Nesbo, and Mankell were enough, but I may have to keep an eye out for Sandford and his next Virgil Flowers book.  A good airplane or winter night book.