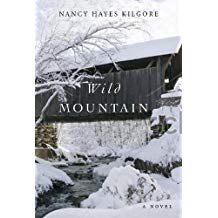 Nancy Hayes Kilgore’s second novel is set in rural northwestern Vermont where a spring thaw combines with a hard rain to destroy the historic covered bridge at the center of the town and of the story.  Mona Duval, born and raised in Wild Mountain, lives on a hill overlooking the bridge and runs the general store on the river’s shore,  and she advocates replacing the bridge with a traditional style.  Opposing her are the old-timers in town, concerned about costs and taxes.  While the controversy over the bridge replacement is the center of this book, the novel is really all about love.  Through a series of love stories involving multiple couples, Kilgore gives the reader a veritable glossary of how love can both save and savage folks at all ages.  Will Mona, divorced from her violent and mercurial husband John O. Duval find happiness with Frank McFarland, a divorced, 50 year old entrepreneur who has had a cabin in Wild Mountain for many years and who is looking to settle down?  Will the chair of the SelectBoard, Roz Allingworth and her partner, Heather Brae who grows organic vegetables be able to marry? Will Erica McFarland, Frank’s 25 year old New York City-based daughter, find common ground with Jake Perez, the Burlington newspaper reporter who arrives in town to write about the bridge collapse? Will the teen-aged Sierra and Grace figure out what love means with the ethereal and spiritual Gus Throckmorton and the juvenile delinquent Robbie Fayerweather?  Kilgore  creates beautiful sentences and superb descriptions, especially lists. Heather’s exotically named vegetables are Purple Passion asparagus, Golden Mama tomatoes, Green Fingers cucumbers. Frank’s kitchen drawer falls to the floor and “spilled a cascade of pennies, quarters, pesos, New Zealand twenty-cent coins with the Maori carving, pencil stubs, ballpoint pens, notepads, loose crumpled scraps of paper with penciled notes from ten years ago, a tattered checkbook, loose keys whose use had been lost with time, an old Wild Mountain town report, and a desiccated mouse, for God’s sake.” Admit it; we all have a drawer like that!  Kilgore was named the 2016 recipient of the Vermont Writers Award given annually by Green Mountain Power and Vermont Magazine for an early version of the Mona and Frank story. As a pastoral counselor with 20 years of experience, she has drawn on her first-hand knowledge of the variety and richness of the human experience to write a fine novel.  Filled with colorful characters and built around many of the contemporary issues that continue to roil Vermont today—the opioid crisis, taxes and the ability of multi-generational families to stay on the land, gay rights, and domestic violence—this is the Vermont winter equivalent of the summer beach read.  Curl up with it by the wood stove and think warm thoughts about next spring’s green mist in the hills.

The Path of Insight Meditation, Joseph Goldstein and Jack Kornfield (#2328)