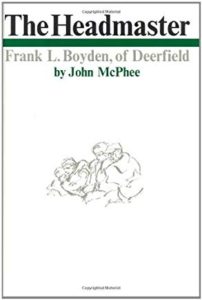 I loved this book!!!!  McPhee is among the very best essayists of our time, despite (or perhaps because) now closing in on 83 years old and still writing exceptional work from his long time post at Princeton.  This book, written in 1966, was his second and comprises a long profile that was published in The New Yorker, one of the earliest profile essays that have been the hallmark of this magazine for decades.  The topic of this profile was Frank Learoyd Boyden.  If the name doesn’t ring a bell, don’t be disappointed or embarrassed.   I’d never heard of Boyden until I bought this book at a used bookstore last week because it was written by McPhee, opened it, and became totally engrossed in the writing and the man.  Boyden, born to a foundry owner in Foxborough, MA in 1879 and a graduate of Amherst College was the sole applicant for the position of Headmaster at the Deerfield Academy in 1902.  The school had a single building, 14 students, and little prospect of survival.  McPhee wrote his profile 64 years later when Boyden was still Headmaster and Deerfield had become a paragon of private school education.  The book is full of charming and funny anecdotes recounting how Boyden and the Academy became synonymous and how Boyden’s commitment to the development of young men was his guiding principle.  The world has changed immeasurably from Boyden’s world of 1902 and even from his world of 1966, and the one man imperious rule that he exemplified will never be seen again, but what a wonderful story it makes.  Two particular stories will remain with me for some time.  In one, McPhee recounts how Boyden convinced a nearly mute farm boy from the area to enroll in the school, to play sports, and eventually to be the commencement speaker at graduation.  Tom Ashley recovered his voice and went on to captain the baseball team at Amherst College and return to Deerfield as a teacher and a close confidant of the Headmaster.  In typical McPhee fashion, we learn in a sentence that seems to come out of the blue that Ashley was killed in France in WWI and that Boyden used a personal check from the Marine Commandant to build a dormitory for boarding students, Ashley’s pet project.  In the second story, McPhee tells how John Winant, later to become the Governor of New Hampshire and the American Ambassador to Great Britain during WWII, visited Boyden in the 1920’s on an assignment to lure him to Brearley School in New York City. After spending the day with Boyden in Deerfield, Winant concluded that his quest was futile and that Boyden and Deerfield were the perfect match for both.  Boyden retired in 1968 after 66 years as Headmaster and died at the age of 92 in 1972.  A fascinating sui generis character and a story that could only be told this well by a sui generis writer.