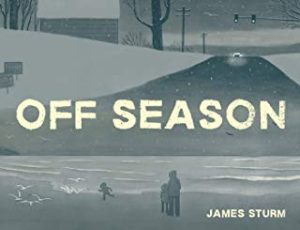 Sturm applies his considerable skill as an artist to create a moving graphic novel about family, divorce, and life.  With the backdrop of the 2016 election, Mark and Lisa’s seven year marriage is falling apart. They’ve separated and are trying to work things through with a mediator, but life keeps intervening.  Mark has had to sell  his truck and give up his independent contractor business and begins working for the wrong boss, their two children are stressed out by the separation and acting up continuously, the car needs snow tires, Mark’s mother is diagnosed with cancer, etc, etc.  And behind all of this is the unsettling outcome of the 2016 election.  The old saying that a picture conveys more than a thousand words might be an effective summary of the graphic novel and this one in particular.  The book can be read twice in one tenth of the time it would take to read a 250-300 page novel that would tell the same tale, and I found the combination of words and pictures to be a powerful narrative technique.  The panels showing Mark and Lisa’s courtship, the frustration and helplessness of the overwhelmed Mark, and the family gathering for Christmas when Lisa joins them because of Mark’s mother’s illness are moving, even without the words. I’ve failed to remark upon what might have struck me as weird at the beginning of the book but which felt quite normal by its end—-Mark, Lisa, and all the other characters are drawn as dogs, not humans.  Echoing Maus, Art Spigelman’s trail-blazing graphic novel of 1980, the use of animals is an effective technique for broadening the scope of the book’s observations.  Sturm, one of the founders of the School for Cartooning in White River Junction, Vermont, has created a moving work.

The Beginning of Spring, Penelope Fitzgerald (#2395)