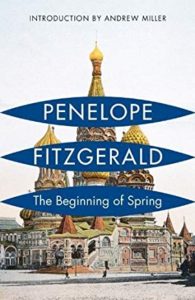 The Beginning of Spring, Penelope Fitzgerald 1988

It’s March, 1913 and Frank Reid’s wife Nellie has left him a message that she is on the train from Moscow to Charing Cross, London with their three children.  She leaves them en route at the Mozhaisk station from which they are returned to Moscow where Frank, a British citizen who was born and has lived his whole life in Moscow where his father had begun a printing business in the 1880’s,  is reunited with them.  Thus begins Fitzgerald’s 1988 novel in which we are introduced to a household full of fascinating characters amid the pre-revolutionary chaos of the Czar’s Russia.  We learn in the book’s final sentences that Nellie returns, but in between, we are treated to Fitzgerald’s subtle tongue-in-cheek humor where she cleverly and discerningly dissects human foibles and frailty.  Not much happens in this book but, nonetheless, we’re sorry when it ends. In his 2014 New York Review of Books review of Hermione Lee’s biography of Fitzgerald, Alan Hollinghurst describes Fitzgerald as having the “gift of selection and distillation” for “giving life by momentary, telling details in which a lifetime’s observation is condensed and a hundred things she can’t have known are vividly imagined”.  Having graduated Oxford with a first in English and chosen the most outstanding student by the literary magazine, Fitzgerald set off to write but didn’t get around to it until she published her first novel at the age of 60.  During those 40 years she taught and supported her three children while her husband suffering from WWII PTSD gradually sunk into alcoholism and an early death. Her initial effort was followed by 8 additional novels, a Booker Prize, and a National Book Critics Circle Award before her death in 2000.  These included  The Blue Flower which is widely considered a modern classic, taught by James Wood in his Post World War II British and American Novels course at Harvard and named by the Observer as one of the ‘ten best historical novels.’  I’ve read that book as well as The Bookshop which was made into a small jewel of a movie last year starring Emily Mortimer and Bill Nighy.  I can’t recommend Fitzgerald highly enough.  Should you choose to read her, I’d begin with The Blue Flower.

The Magnanimous Heart: Compassion and Love, Loss and Grief, Joy and Liberation,...