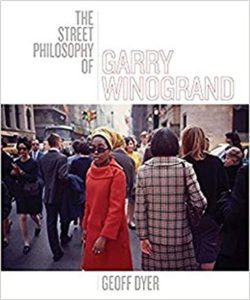 Garry Winogrand (b. 1928 Bronx-d.1984Los Angeles) was one of the leading American photographers of the latter half of the 20th C, a time of rapid change in photography as well as society.  Along with Walker Evans, Robert Frank, Lee Friedlander, Diane Arbus, and Berenice Abbott, Winogrand was responsible for moving photography from being considered a hobby for the masses to the art form that is so widely represented in American museums today.  Working largely in New York City, Los Angeles, and London, he recorded people and places with a studied spontaneity often capturing an individual or group in the seemingly endless flow of people moving down urban streets.  Making the transition from classical black and white to color, his compositions often included the action ‘out of the frame’ and left the viewer wondering ‘Why this moment?’ and ‘What is happening in this Wynograndian setting?’  I have a rather superficial interest in and knowledge of  photography, so what drew me to this beautifully composed book was Dyer, one of my favorite essayists and commentators on the modern world.  Dyer spent months at the Center for Creative Photography in Tucson where the Winogrand archives are housed after the idea arose in a  conversation with another one of my favorite essayists, Janet Malcolm,and at the invitation of David Hamrick, the Director of the University of Texas Press.  The result is a hefty volume containing 100 of Winogrand’s photographs on the recto page with a 1000-2500 word essay by Dyer on the verso page.  In these essays (which could really stand alone) Dyer comments on the ‘complexity’ of the photographs, their composition especially the margins, Winogrand’s obsession with the ‘random glamour of the street’, beautiful women (which includes all of them at some point), and the endless shapes and shades of light.  As Dyer states, “You could construct a novel—a whole sequence of novels—out of Winogrand’s pictures.”    This is a book to leisurely leaf through to enjoy the photographs or closely read to enjoy a unique critic’s take on them. I probably won’t explore more of Winogrand, but I’m eager to read Dyer’s first book on photography, The Ongoing Moment, and everything else he has written.