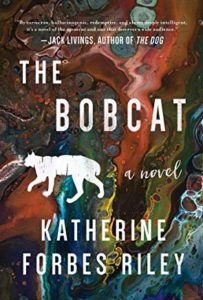 This is the first novel by a writer and computational linguist who lives in Norwich, Vermont.  It tells the tale of Lorelei who flees college in Philadelphia after experiencing a terrifying date rape and lands at Montague University in rural Vermont.  There she provides day care to her landlords’ 2 year old son while taking classes in art and working to overcome her PTSD which has resulted in her fearful shunning of all social contacts.  Her world changes one day when, while walking along a brook in the woods with her 2 year old charge, she encounters a bobcat and a mysterious man, whom she names ‘the hiker’. The rest of the book tells of Lorelei and the hiker’s deepening bond and has some beautifully, romantic interludes.  Unfortunately, the book feels terribly overwritten with 90% more adjectives and adverbs than would be ideal, e.g. in referring to the hiker’s backpack, Riley writes “his laden pack, whose pale canvas glowed with such melancholic radiance beneath the moth-struck yellow bulb.”  Really? Or in referring to the hiker’s reappearance in Lorelei’s life, Riley writes, “In the dusky light his eyes were wide obsidian brushstrokes, his lips a crimson slash.”  The story itself is a good romance, a bit like a 21st C. ‘me-too’ update of The Bridges of Madison County with elements of Clark Kent thrown in as the hiker miraculously materializes to save the day on more than one occasion.  There’s even some medical science fiction, ala Michael Crichton, thrown in as the hiker’s special powers are attributed to a rare and perhaps ‘catchy’ viral infection.  All is all, a good choice for a beach romance, but not going to make it to the Classics list.

Blueprint: The Evolutionary Origins of a Good Society, Nicholas A. Christakis...