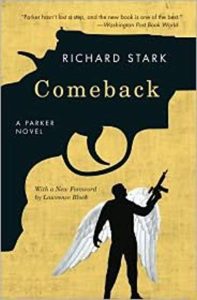 Westlake wrote more than 100 crime novels many under pseudonyms.  Awarded three Edgar prizes and elected a Grand Master by the Mystery Writers of  America, he was a leading practitioner of this art through his death in 2008.  One of his pseudonyms was Richard Stark whose protagonist was Parker, a smart, tough criminal who didn’t hesitate to kill when necessary.  From 1962 to 1974, 16 Parker novels appeared, sometimes more than one a year. Then Westlake took a break, and another Parker didn’t materialize until 1997, Comeback.  This story is a really good one with a tight plot involving stealing $400,000 in cash from a stadium where a religious evangelist was scamming another crowd.  Parker and his regular team, Ed and Brenda Mackey, hook up with George Liss, who turns out to be big trouble until Parker finally kills him.  In typical fashion, you root for our bad guys who get away with the money in a story that has lots of great action and plot twists and turns.  Love this series!