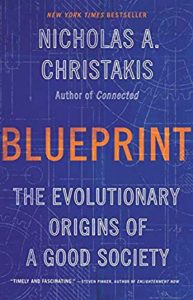 Blueprint: The Evolutionary Origins of a Good Society, Nicholas A. Christakis 2019

Christakis, the Sterling Professor of Natural and Social Science at Yale has written a very big book in two senses.  First, it’s 520 pages long with 80 pages of detailed supporting end notes and 13 pages of an index that goes from the Ache tribe of Paraguay and John Adams to two 20th C. sociologists, Benjamin Zablocki and Morris Zelditch.  Second, it’s a fascinating and controversial introduction to behavioral genetics in which Christakis argues that our genes not only determine our structure and biochemistry through their coding for proteins but also determine to a degree our behavior, our interactions with others, and also shape our environments.  Rejecting positivism, reductionism, and other ‘isms that would claim that man is so different from the animals that any genetic determinism is unacceptable, Christakis points out the disasters that have resulted from individuals like Stalin and Mao ignoring the hard wiring of their people and believing  that they could force them to act against their individual interests.  Identifying a group of behaviors that have evolved in humans as the social suite—-cooperation, altruism, friendship, in-group bias, soft hierarchy, and learning and teaching—-he identifies culture as the truly unique human characteristic, i.e. the ability to learn and teach, to pass on from generation to generation the wisdom and experience of the past.  His book ends with an optimistic outlook despite his recognition of the deplorable state of the world today and concern about two developments that were also cited as major warning signals by Bill McKibben in his book Falter.  Both authors raise serious concerns about Artifical Intelligence and CRISPER as technologies with the ability to change human beings in ways that have never been experienced before.  Interesting that these two men coming from very different disciplines cite the same two worries.   This is not an easy book to read even for one schooled in the scientific method, but it’s an important book for our times and is filled with fascinating anecdotes, scientific sociological studies, and factoids.  I highly recommend it, but don’t expect to finish this in a day or two.