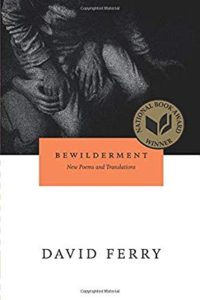 Bewilderment won the 2012 National Book Award for Poetry, bringing yet another honor to Ferry, at 95 years old, an emeritus English professor who taught at Wellesley for decades.  Combining his translations of Latin poets including Horace, Virgil, Catallus, and Martial with a translation of Genesis from an Anglo-Saxon version with poems dedicated to Cavafy and Arthur Gold, a fellow English professor at Wellesley who died in 1989 at 53 years of age, and poems written over many years, this volume comes to grips with one’s bewilderment at loss, death, and what comes after death drawing upon the wisdom and experience over the millenia and bringing them to bear upon the reality of Ferry’s own life.  The book is dedicated to his wife, Anne, a literary critic who died in 2006 and the loss of one’s wife is echoed in Aeneas’s story of how his wife was lost, separated from him, his father, and his son during their flight from the burning Troy.  The loss of childhood seen most vividly in his translation of the Akidah is echoed in Ferry’s own reminiscences of childhood losses.  In describing a tree from his childhood, he writes, “How did I ever know what the tree was called?/Somebody must have told me. I can’t remember./Whoever it was has become a shade imagined/From an ancient unrecoverable past.”  This theme of loss and the bewilderment at the both loss and what is left in its wake is the central thread in this beautiful and memorable volume.

Blueprint: The Evolutionary Origins of a Good Society, Nicholas A. Christakis...
Scroll to top