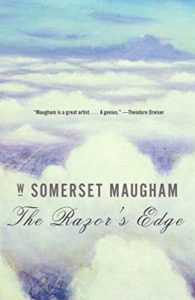 Recommended as their ‘favorite book’ by one of my son-in-laws as well as his father, I’ve been eager to read this classic which had eluded me earlier in life.  Maugham, one of the long list of physicians-turned-authors who fascinate me, was a best selling author in the 1930’s but is not widely read today.  The Razor’s Edge is felt by many to be his masterpiece, and it deserves the recognition.  It’s a really good tale, whisking the reader along in Chicago, London, Paris, the Riviera with a major detour to India, filled with memorable characters that stay with one well beyond the final page.  Larry Darrell, a small town Illinois 21 year old, has returned from WWI where he flew for the Canadian Air Force.  After being saved from a certain death in a dog-fight over France by his closest friend who died as a result of his wounds, Larry returns to Chicago to his childhood love, Isabel Bradley.  Along the way we meet Isabel’s uncle Elliott Templeton, her mother Louisa, her friend Sophie MacDonald, her eventual husband Gray Maturin, and a host of minor characters.  Fascinatingly, Maugham is also there narrating the book in the first person, an English author who writes in France, visits Chicago, and tells the story, mostly in retrospect.  As the narrator says on the final page:  “For all the persons with whom I have been concerned got what they wanted:  Elliott social eminence; Isabel an assured position backed by a substantial fortune in an active and cultured community; Gray a steady and lucrative job with an office to go to from nine till six every day; Suzanne Rouvier security; Sophie death; and Larry happiness.”  Note the distinction Maugham makes between success and happiness.  Only Larry with his restless search for meaning, goodness, and inner peace is truly happy as well as successful.  A marvelous tale and deservedly a classic.