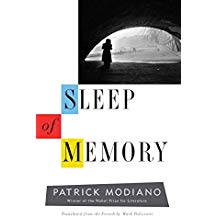 Modiano won the Nobel Prize in Literature in 2014 for a body of work that explores time, the past, memory, and loss. I had read one previous book of his, a complicated story of an amnesiac trying to figure out who he is and where he came from.  In this book (which by the way, I found so intriguing that I immediately re-read it, something that I rarely do), the narrator is a 73 year old novelist (born in 1945 as I was!) who in looking back over his life is mystified by the randomness and specificity of memories.  Many of his memories are about women most of whom were older and influenced him in his late teens in platonic relationships.  Terms like “encounters”, “disappearances”, multiple adjectives surrounding time such as “suspended”, “passing”, “eternal return”, and his frequent”running away” from relationships color his struggle to reconnect the dots of his life.  Paris with its neighborhoods and streets is a leading character in this dreamy and disorienting novel.  In one marvelous paragraph, Modiano writes:  “I wonder why some books or objects persist in following you around your whole life, without your knowledge while others, much more precious, are lost…… You wonder if you’re walking in a dream and you end up doubting your own identity.” And writing about the future, he captures a desire which I’ve long had—-the wish to know what has happened to the hundreds of people whose path has crossed mine in the past, nearly all of whom have been lost in time and space:  “I was sure that, in the future, you’d need only enter onto a screen the name of a person you had met once upon a time and a red dot would indicate the spot in Paris where you could find them…..If we could relive something we’d already experienced in the same time in the same place and the same circumstances, but live it much better than the first time, without the mistakes, hitches, and idle moments, it would be like making a clean copy of a heavily revised manuscript.” This is a wonderful piece of writing and should appeal to anyone who thinks about time, memory, past relationships, mortality—in short, everyone.  Did you like the 2000 movie Momento in which a man who has lost his memory tries to track down his wife’s killer?  This book explores many of the same questions about reality, memory, time, and people.  I loved it.