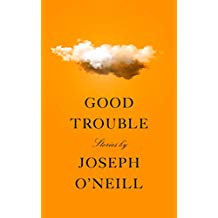 O’Neill, perhaps best known for his PEN/Faulkner Award winning novel Netherland, has collected 11 stories which originally appeared in The New Yorker, Harpers, The American Scholar, or a variety of Irish writers’ collections.  The stories all take place in contemporary New York City which in some sense is the central character in each one.  Each story tells the tale of a person, couple, or family caught in a dilemma—does a marginally known poet participate in a newspaper ad petition to pardon Edward Snowden?, does a professor who’s moved to Nova Scotia have to welcome a former student’s visit?, does a mother have to attend her grandson’s bris across the country?, who does a guy who is trying to buy a co-op find to write a letter of reference?, how do guys spend a golf weekend?, how does a guy behave at a wedding in Italy when he’s the only college buddy who shows up?, and on and on.  These are not the most existentially fraught situations, but O’Neill digs deeply to highlight the angst, isolation, and fragmentation experienced in our current world.  From a PTA auction to the counter stools in a diner, the characters seem to be enormously anguished about trivial matters.  Maybe O’Neill’s message is that life’s difficult especially when it’s so trivialized and distant from real issues.  Worthwhile reading, but not essential.