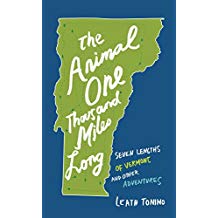 As a Vermont-ocentric, nature-aholic, and data obsessed person, it was easy for me to love this book!!! In 20 chapters, Leith Tonino a twenty-something writer applies metaphors of breadth and depth to his native state,  taking the reader from Glastonbury, a mostly abandoned town in the southeast corner of the state to Jay Peak, at the Canadian end of the Long Trail and dozens of points in between and from the 19th C. naturalist writer, Rowland Evans Robinson to Robert Frost and John Elder.  The natural world of Vermont and physical activity, often of the extreme kind are his central themes.  Tonino writes with verve and style, occasionally losing a firm grip on the tiller in purple prose or an overwrought metaphor, but mostly crafting fine sentences and beautiful images.  He describes approaching the pre-dawn gathering of birders for the Christmas Bird Count in a café which “stands out from a row of closed shops and sleepy apartments, as if the whole town were a single dark house, the lights left on in this one room.”  He’s guided through his first Bird Count report by Mike with a “fatherly tone of a T-ball coach.”  He walks across empty fields bounded by “barbed wire fences sifting the wind”.  This is fine writing and it is present on nearly every page, engaging and delighting the nature loving reader.  The final chapter entitled Seven Lengths of Vermont is a testimony to the author’s extreme physicality as well as his brilliance as a conceptual artist.  He walks the Long Trail’s 273 miles in 22 days; he hitchhikes between Vermont’s borders with Canada, Massachusetts, New York and New Hampshire with 51 strangers and 36 rides over 5 days; he spends three weeks skiing the 300 mile Catamount Trail from Massachusetts to Canada; he spends a week biking more than 500 miles wending his way from south to north and west to east; he paddles 260 miles of the Connecticut River with his father from Canaan to Vernon; in perhaps the most bizarre of his self-imposed challenges, he swims/floats 120 miles of Lake Champlain from Benson Landing to Alburgh’s causeway; and finally, he spends four hours in a two seater airplane surveying the Green Mountain State from above.  As someone who has completed about one third of the Long Trail, walked the length of every street in Cambridge, MA, and walked Rowe Hill behind our home in Brownsville on every date of the calendar, I really loved Tonino’s concept of Seven Lengths of Vermont,  his “belief in the unbounded potential for exploration close to home.”  So, in case you missed it, I loved this book.  It’s not for everyone, but if you are an outdoors person, a naturalist, an athlete, a lover of Vermont, or someone who enjoys a good story, well told, I think you’ll enjoy curling up with this book on a cold winter night.