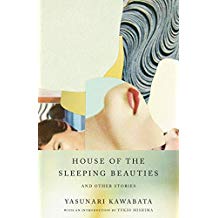 House of the Sleeping Beauties And Other Stories, Yasunari Kawabata 1961

I had never heard of Kawabata, the winner of the Nobel Prize in Literature in 1968, until I read a New York Times Book Review article in September, 2018 in which four NYT reviewers commented on the postponement of this year’s Prize due to a “sex abuse scandal in the august halls of the Swedish Academy, which hands out the award.”  The reviewers were asked whether they would miss the awarding of the prize this year, and Parul Sehgal commented that when he sat down to write his comments, he espied several books on his shelves that the “Nobel had shone a light” on and that he might not have found otherwise.  Among those books he mentioned was Kawabata’s erotic masterpiece, The House of the Sleeping Beauties, an author and a book that had escaped my attention up until now.  The book itself is a bit creepy.  The eponymous first story tells of Eguchi, a 67 year old whose desire and capacity for sex is declining with age, who repeatedly visits a brothel where the ‘prostitutes’ are young virgins who are so deeply sedated that they never awaken during his nights there.  His physical contact with these young girls is limited to sleeping next to them but it leads to thoughts of his earlier sexual encounters as time and history become ever more fluid.  The second story is really weird.  The story begins with the narrator being given an arm by a woman who never reappears.  The narrator spends the night with the arm and ultimately exchanges it with one of his own.  Huh?  The final story is about a man who collects animals and birds, but whose relationships with people seem to be limited and fraught.  His earlier love, a dancer named Chikako, appears throughout the story, but she marries someone else, and the narrator remains alone and isolated.  All in all, a rather strange set of stories.  Perhaps, as the Nobel increasingly responds to a diverse international literary scene, I will occasionally have difficulty appreciating some of the writing.  I think I’ll stick with the traditional American Nobelists—-Hemingway, Faulkner, Steinbeck, Singer, Morrison, Buck, Bellow, Brodsky, Sinclair Lewis, Eugene O’Neill, and yes, Bob Dylan.