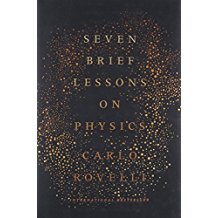 A short, brilliant explanation of some of the most complex ideas that have shaped our understanding of the world over the last 200 years.  Rovelli addresses the topics of general and special relativity (Einstein & Reimann), quantum theory (Planck, Bohr, Heisenberg), the cosmos, the basic particles of matter (Feynman, Gell-Mann, Dirac), the conflict between relativity and quantum theory, the nature of time, and man’s place in this universe in fairly simple language and without equations or heavy science.  Nonetheless, these are not simple ideas and he treats them and the reader with respect.  The most fascinating idea is that time is subjective, with the notion of ‘now’ being as unreal as the notion of ‘here’, i.e. totally dependent on who, where, when, what.  He finishes with a fairly downbeat notion of man, free will (it’s our brain and the neurons reflecting and obeying the laws of nature), and the future of our species which will inevitably disappear.  Nature, on the other hand, is eternal, whatever that means!