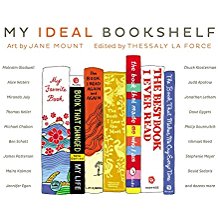 I loved this book so much!  I want to give it to all my good reading friends!  LaForce and Mount asked many creative people (authors, designers, artists, chefs, dancers, musicians) to identify their Ideal Bookshelf comprising books which ‘represent you—have changed your life, that have made you who you are today, your favorite favorites.”  The 105 respondents from the famous (Michael Chabon, Jonathan Lethem, Francine Prose, George Saunders, David Sedaris, Patti Smith, Atul Gawande, Malcolm Gladwell, Dave Eggars, Drew Gilpin Faust!) to the relatively unknown, sent in the names of their books and Mount then did a painting of the grouping on a shelf, occasionally adding objects which were also provided by the respondents.  The result is 105 Book Shelves and more than 1000 individual books, again ranging from the well known to the unknown.  For sheer pleasure, both visual and intellectual, spending an evening curled up with this book is highly recommended, and for ideas about what to read next, this can’t be beaten.  As you’d expect, Moby Dick, Hemingway, Nabokov (equal votes for Pale Fire and Lolita), Faulkner and Garcia Marquez show up often.  Surprisingly, Murakami and David Foster Wallace popped up a lot as did short story writers Flanner O’Connor, John Cheever, Raymond Carver, Lorrie Moore, Tobias Wolff, and even Lydia Davis.  Poets were well represented with Stevens, O’Hara, Dickinson in the lead while Shakespeare (especially Macbeth) was often included.  Joan Didion and Michael Herr (Dispatches) were popular essayists.  Lots and lots of cookbooks and design books as well.  Major surprise and probably a sign of age, my favorite 20th C authors were almost totally ignored—not one mention of Mailer, only one mention of Bellow’s Herzog, a few Roths and even fewer Updikes.  The world moves on!   Some wonderful quotes:  Jonathan Lethem said “The thing about this bookshelf is that each of these books is a vast experience unto itself, while also being both self-contained and superbly useless.  Reading any one of them doesn’t get you anywhere particularly meaningful; you haven’t arrived or graduated; you’ve just gone and done something that passed the time.  It’s like taking a long walk with a friend who’s got a lot to say.  There’s no cumulative purpose to it—it’s just an excellent way to waste your life.”  Another fine quote is from an editor of the NYT T Magazine, Sally Singer:  “There’s a way in which these books—if you read fiction critically and emotionally and consistently your whole life—allow you access to visions of yourself.”  And finally, Vendela Vida, editor and author:  “Why do I read: to know I’m not alone—escape, humor, philosophy, story, craft.